What do we Really mean by "Indo-European"?

The Magick of the Runes is a well known legacy of the early Germanic peoples. But aside from the very presence of the word “Rune” as a secret in various Indo-European languages (Welsh rhín, Gaulish runal, German raunend, Persian ravan, etc.)... we see other angular scripts having been used, perhaps sometimes magickally or spiritually, in several Indo-European cultures. What, then, does the average Heathen or Rune-seeker really know about those cultures and their gods?

Cuneiform is one of the oldest written scripts still surviving in artifacts, but what isn't often mentioned in textbooks, is that many diverse peoples used and modified it as their writing system. People today generally associate it with various Semitic cultures in Mesopotamia; however Indo-European nations such as the Hittites, Hurrians, Mittani, Gutians, Medes, and Persians wrote their languages with it as well.

The early Sumerians, also known as the Ubaid culture - neither Semitic nor Aryan - are the oldest well-documented culture to have made use of Cuneiform; but they themselves credited the invention of writing – and thus Cuneiform – to the Abgallu, a race of men so technologically advanced and yet simultaneously so in tune with nature and its cycles, that they were known in Sumer as no less than gods. The Abgallu were depicted reverently in many Sumerian sculptures. This was by all appearances an Indo-European group, clothed in woven textiles and shining scale-mail before most humans even had copper tools, and the land of Dilmun they supposedly came from, was most likely not in Bahrain, but in a mineral-rich mountain region near the Caspian Sea (later the Iranian province of Deylaman; later still, Gilan). They journeyed south and boated down a river known as Abzû, the Neolithic predecessor of the modern Arvand-Rûd flowing down the Zagros ranges to the Persian Gulf, which was once far longer and deeper than its current form. They rode boats down this river allegedly resembling sea-serpents - anticipating the Viking longships to come millennia later. And from there, they reached Sumer. 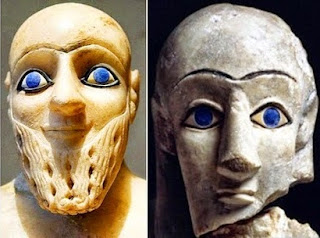 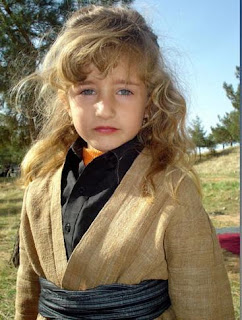 Another deeply ancient and mysterious angular writing script was the Indus Valley script; used to write the early Indo-Aryan language, whose descendants were the Prakrit languages (such as Jain Prakrit and Pali), many parts of which were later altered radically by the Vedic Brahmins to form Sanskrit after about 1000 BCE. Long preceding Sanskrit, or even the Brahmi script, the Indus Valley Script was the hallmark of the great agricultural walled cities of Harappa and Mohenjo-Daro, the precision-engineered (and plumbing-equipped!) strongholds of the tripartite Suryavanshi culture. 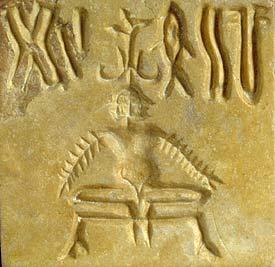 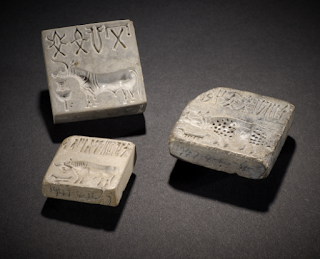 This Rune-like script was written on tablets depicting farming and cultivation of crops, as well as the oldest known depictions of Yoga postures – many centuries before the Vedic (and ultimately Turanid) invasion of the Iron Age, which not only usurped credit for both writing and yoga, but also the very meaning of Aryan culture itself. The Suryavanshi tablets, which appear to include reverent depictions of Asura gods, have yet to be deciphered, despite the Indian state and Hindu temple foundations having plenty of funds for building vast statues of Krishna and Shiva.

There are various groups associated with the development of Indo-European culture whom we now consider different "ethnicities", and which the Christian narrative still dominant in Europe has led many people to relegate to a vague “Middle Eastern” designation of alien others. Many of these eastern Indo-European peoples were engulfed in the growth of Islam, from the battle of Qadisiyya, through the Caliphates, and on through the Ottoman and Safavid Empires, until today - just as their European cousins were engulfed by Christianity and similarly divided among its various schisms. In the Islamic world too, many ancient Indo-European and even Runic-style symbols persisted, hidden in plain sight in Mosques and Musallas just as Celtic and Germanic pagan symbols (sometimes the very same symbols) were quietly incorporated into Churches and Cathedrals. Perhaps some people will get extremely emotional at reading these words, not having seen the proof before. But know that the powers that profit by keeping the different branches of Indo-European peoples mired and trapped in the conflicts of Abrahamic factions, never bother to inform you of this. 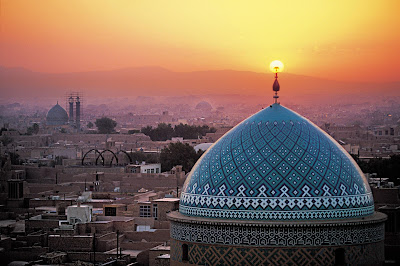 The label “Indo-European”, in my humble opinion, does not mean merely a family of languages spread by demic dispersion in a gigantic transcontinental game of “telephone” from one random unrelated tribe to another. Rather, it is to be understood as a dense cluster of related languages, cultures, religious interpretations, and ethnic groups, all of whom are often genetic cousins if not brothers. Pinpointing their origins is a topic of constant debate, however, most believe it to be in southern Russia, or either the Iranian or Anatolian plateaus, with outposts in the Byblos culture of Neolithic Syria and the Cycladic Titan culture of Neolithic and Bronze-Age Greece. A number of Indo-European bloodlines with the R1b Y-DNA haplogroup, are known to have entered into the Egyptian royal class, which kept close correspondence with the Indo-European Hittites over centuries, even sharing similar heraldic eagle motifs, which the Achamenid Persians also would use. Among Heathen traditions, Armanenschaft openly holds these links as sacred.


“An instructive example is offered by the heraldic eagle... the hieroglyph or device of Aryandom and of the later German empire, a hieroglyph which was already being borne by the Aryans in Asia, for example, Cyrus the Achaemenian, as well as the Pharaohs, the Greeks, and the Romans.”
- Meister Guido von List (Das Geheimnis der Runen, p. 43)

If you want to fully understand Indo-European faiths and cultural values, you must also analyze the most ancient creators and evolvers of this culture. Those who shout "Valhalla" at the top of their lungs, but have no desire to learn about Svarga, or Ahura Mazda with relation to Asura, Aesir, and Ansiwiz, are missing a complete understanding. Those who think they know Wotan, but have no desire to learn of Vayu-Vata, are lacking in appreciation of the full vastness of Irmin's (Airyaman's) wisdom. Those who hail Freyr or Freyja and the Vanir, but have no interest in learning about Fravhar and Feriya of the Vanaras, are truly cut off from the vastness of the primal Indo-European religion. Those who speak of Druids or Völvas, but don't want to acknowledge Katouzians, Kayasthas, Magi, and Pythias (Oracles) as very similar spiritual guides, are selling themselves short. 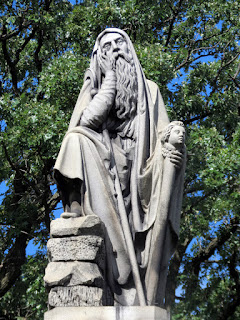 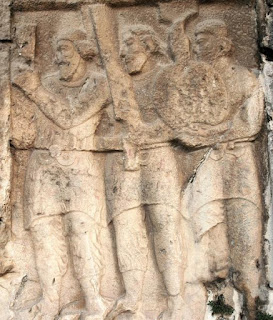 Those who worship the Virgin Mary, Santa Maria, or Maryam al-Muqaddasah, and cannot understand how she is a created stand-in for both the Mother Goddess and Mother Earth, are praying to a hollowed-out substitute.

However, those who worship Freyja, Frigg, Idunna, Jörð (Erda), or Ostara (Eostre), for example, and do not know of Feriya (Priya), Frougha, Aditi, Athena, Arda-Vahishta, or Astraea among the ancestors of their non-Germanic cousins, are also missing out on how important the Mother Goddess is in an Indo-European context. 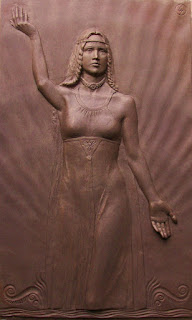 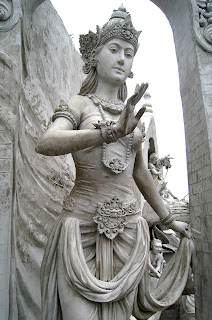 If you look to the storming sky for Thor or Taranis, but do not understand that this is also Thuragna, Vire-Thragna, Vahagn, Tarḫunz and Perun, you have failed to see beyond the fog on the next field. If you swear by Týr because “Vikings are badass warriors” but look down upon the fact that your Indo-European brethren swore similarly by Tiwaz-Tyr, Tuisto, Toutatis, Tivash-Tir, Tishtrya, or Tvaṣṭṛ, then you are belittling your ancestors' oaths as well. 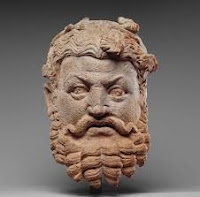 Those who know of Yggdrasil, the World-Tree of the Cosmos in Norse Eddas, but are resistant to even learning about Har-visp-tokhm in the Iranian Avesta, or the Ashavattha tree in the North Indian Puranas, are also missing the greatness of the whole picture and the vast impact of this Cognizancy.


“The descent of Wotan from the World Tree constitutes an old Aryan ritual. According to the Bundahishn, when the Zaotar [high priest] of the Persians performs the Solar Sacrifice before the holy tree [Har-visp-tokhm] and speaks the word of salvation, here too divinity descends and reveals itself in the celebrant.”
- Meister Peryt Shou (Die Edda Als Schlüssel des Kommenden Weltzeitalters, p. 24)

If you see everyone who happens to be a Muslim as Arabic only, and fail to see the millions of sons and daughters of a converted people in need of a return to their own Indo-European roots (or even if they are Adnani-Arab, or Assyrian, or Babylonian, and do not know the farmer-archetype side of their Semitic pagan roots), then you are a slave to an agenda. If you are either Christian or Muslim, and deny the influences Indo-European culture and religion had on your faith then you are a slave to an agenda. An agenda that has you warring against brothers for the wrong reason. Not for desperately short resources, or an insult to your clan's honor, or even territory to farm, but in the name of a conversation to a god whose scriptural language you can't speak, a god you barely understand yourself. Those shouting “Valhalla” at the top of their lungs (as merely a substitute for “Deus Vult”), right before screaming profanities and threats at the Kurdish cab driver or the Persian restaurant owner, are no different. Divided and conquered.

If you must fight, then do so for honor, wisdom, protecting your family, protecting and improving your culture and heritage - but not to force others to give up their culture for what you believe is yours. There is nothing to say that you aren't just as subconsciously burdened with the residues of your former Abrahamic prejudices, as you assume they are with theirs. Who is to say that you aren't merely gulling yourself and taking the name Vili-Vé-Wotan in vain as a convenient stand-in for Jehovah, if you still have not understood the souls of the children of Vairîm-Vayu-Vata? Who is to say that your blood-memory isn't just as mixed with the Cro-Magnon or the Finno-Ugric, as theirs might be with the Zarzian or the Elamite? True diversity is understanding that all Indo-European successor peoples, and even some non-IE peoples they assimilated, are related to a certain extent, but are allowed to stay their own way if they choose to do so, and are better off in seeking cooperation and mutual understanding, not in fighting the wars of attrition and mutual erasure that pastoral ideologues continue to market to us. Those of us that do wish to recombine across the Hellespont, renew the blood of Ur-Arya, and undo the damage of the wedges that both Nicaea and Qadisiyya drove between us so many centuries ago, should also be respected for that choice. Besmirch it not as “miscegenation”, but Cognize it it as “noble reunification”. Either way, if you want to truly revive your ancient Indo-European heritage and culture in a deep way, it is vital to learn how others from the opposite side of the Caucasus are related to you, beyond what the textbooks and mass-media allow you to know - but do not convert to a one-size-fits-all Crusaderism which hacks off your own foot and destroys the far-branching roots we share with all of our Solar ancestors. 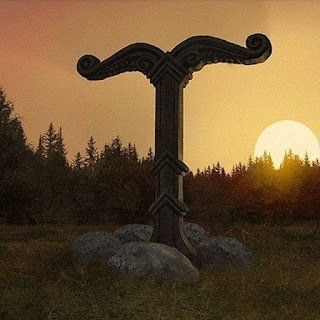 Because all the branches of that folk-tree are worth preserving.