My new Hávamál Translation is now available on Amazon!

For a long time, people of Heathen, Odinist and Runic paths have been calling for a Hávamál translation in English that is accurate, quotable, and doesn't have the discrepancies of the "big three" academic translations of a century ago (Bellows, Auden & Taylor, Thorpe). Furthermore, I myself have desired such a thing - a truly accurate translation of the Hávamál designed by a Heathen, for Heathens, that treats the Old Norse poem of Odin's Word's (including the 18 Rune-verses) with the true level of respect and honor they deserve in Runic paths.

It is shocking that such a thing has been lacking for so long. One of the main issues we have seen glaring up again and again in Runic and Heathen circles, is the total surrender of authority of interpretation and translation of core Heathen Lore, to outsiders! For the most part, the translations are by SAPs (Secular Academic Purists) who pick apart, rearrange, and mutilate the text like some cadaver in a 1st-year medical student's training. There have been PhD professors who go unquestioned, merely because they have a PhD, but have no real reverence for the Hávamál and the other Eddic texts; as a result each academic with a fragile ego seems to twist, abridge, excise and censor passages to fit their pre-determined notion of what the Hávamál "should" say to make a name for themselves in their academic career, usually pandering to the dialectical materialist camp of "political correctness" that has infantilized state university curricula in most of the NATO countries.

The fallacy of "appeal to authority" has also misled many a new "heathen" who is still an irreverent agnostic at heart, to trust PhDs and academic credentials over cultural grounding and respect for the Old Ways; as a result, translations are promoted which have a personal careerist agenda, and really do not capture the essence and cultural nuances of the Old Norse original, and to boot, are often in an archaic Elizabethan or Victorian English which is tedious and laborious to understand. Pages are jammed full of footnotes with academic jargon, which is not based in the Odinic path, but in some postmodern political or social philosophy of Judeo-Christian (or JC-reactive atheist) origins. Archaic Shakesperean words like "eke" and "trow" are thrown about with wild abandon, even when they are actually further from the Old Norse words than surviving standard English equivalents - but some of those same grandiose academic translators cannot even avoid basic mistakes like mis-translating the Old Norse word for "woman" as a "torch".

So I am proud to announce finally that there is a translation of the Hávamál that truly reflects traditional Heathen values, is complete and exact, and most of all is readable and quotable in modern English that non-academics can actually understand! By yours truly! And it is done with Rune-practitioners and Heathens in mind. This is a Hávamál you can actually use and quote in rituals, and use for study as well. To reach Immanence, we must first taste noble tradition!

My Hávamál translation is now available on Amazon in both Hardcover and Paperback! Odin's words, rendered straight from the original Viking sacred poem into English! Buy it HERE.

WHAT MAKES THIS TRANSLATION UNIQUE:

*Uncensored (not a single word altered, no political pandering - just straight Norse drengr culture!)
*Unabridged (not a single line cut out, no words removed)
*Translated line-for-line from the Old Norse. (the ordering of the verses and the lines is unchanged!)
*You also GET the actual Old Norse text, side-by-side with the Translation!
*Easy-to-understand footnotes (with NO confusing academic jargon) to clear up all the trickier bits
*Cultural notes in the Preface, Introduction and Postface!
*An Old Norse glossary of some of the most commonly used terms in the Hávamál, for study
*Plenty of space on the pages for taking your own notes!
*No-nonsense, easy-to-use translation that preserves all the Old Norse metaphors and symbolism - translated by a Heathen, for Heathens!
*Reflects the actual cultural flavor of the Viking skalds; not tainted by any ergi modernist agenda!
*Useable in rituals and lessons! Reflects the entirety of the Hávamál's content! Quotable and poetic, yet also accurate! Makes a great Yule gift, for the home Altar or for Heathen family and friends!

Also here's what you DON'T have to worry about with my translation:

*It's NOT by a secular academic with non-Heathen and non-Indo-European ideological loyalties (unlike Thorpe, Bellows, Auden & Taylor)
*It does NOT abridge or truncate verses to fit a modern poetic formula (unlike Bray)
*It's NOT by an academic with a postmodernist political agenda (unlike Hollander)
*It does NOT change the meanings of words to avoid "offending" snowflakes (unlike Hollander)
*It's NOT written in archaic, confusing Victorian or Elizabethan English (unlike Hollander, Bellows, Thorpe, or Cottle)
*It's NOT crammed with confusing academic jargon (unlike Hollander, Auden & Taylor, Bray, etc.)
*It's not by Wiccan/Wiccatru eclectics with political agendas (unlike the Troth and TAC translations)
*It's not by a Satanist or a Setian (unlike Chisholm)
*It does not leave words half-untranslated or unexplained (unlike Chisholm)
*It does not throw away the original idioms and metaphors of the Hávamál (unlike Crawford)
*It does NOT treat the Hávamál as a museum curiosity (unlike nearly all of them).

Buy it here, and see what you have been missing! Now you can experience the Hávamál as deeply as a native Scandinavian whose language is descended from Old Norse! The next step in culturally honest Rune-studies, Odinism, and Heathenry! The Gorgani translation of the Hávamál.

When you buy, please be sure to leave a REVIEW. I appreciate the feedback of my readers. 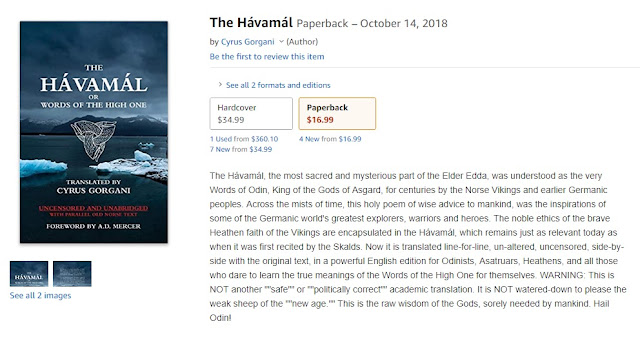 Runes may you find,
and advising staves;
Many strong staves,
many stout staves;
Painted by the Mighty Loremaster
and made by great Gods,
and carved by the Roarer of the Gods.

By popular request, I am posting my basic Rune-Yoga lessons on here for educational use!

The spiritual and physical practice of Rune-Yoga, formally known as Stadhagaldr, is a unique part of the Armanen tradition, per S.A. Kummer, going back to ancient Rune-Masters as a physical and spiritual meditation exercise for both warriors and mystics, and has some parallels in other Indo-European exercise traditions. It is heavily based in Od-energy work and is a self-contained system that evolved toward the western and Germanic end of Indo-European spiritual exercises, resembling Persian Zur-Khaneh training exercises more than most schools of Indian Yoga. Rune-Yoga postures are practiced standing up, forming the shape of the Rune to manifest its energy flow. The text in this basic course is my own, though heavily inspired by the work of Guido von List, S.A. Kummer, and Karl Spiesberger. Some of what you see here will look very familiar to you if you have read their books, and some things will be new, based on my own insights and experience in the practice.

Rune-Yoga has its own terminology, mostly in Old Norse and Old High German.

Postures or 'Asanas' are called Stodhr or stances in Old Norse ( = singular stadha); the Old high German term is stellung.

The 'Mudras' or hand positions are called Handstodhr ( = Old High German Hantstellung).
The Handstodhr can be practiced in a sitting pose, either silently or while singing the same rune's Galdr, anywhere that practicing full-body Stadhagaldr is not possible. There are also some more advanced Handstodhr combinations used in a live Rune-Yoga session.

In Siegfried Kummer's day, only the outer "husk" forms of the Runic Stodhr and Handstodhr were publicly printed (which were later copied verbatim by Spiesberger, and later still by Welz), due to concerns about the turbulent social climate of the times; here their internal "core forms" are revealed, which contain the true power of the Rune-Stodhr in the body. Since the 1970s some "New Age" authors have tried to apply Stadhagaldr to the Elder Futhark, without giving proper credit to the Armanen Masters of the early 1900s for teaching the practice - though in reality it is truly an Armanen practice. However, similar Runic gymnasics exercises are known from the Stáv  tradition for the Younger Futhark (which may share a proto-Germanic origin with Armanen Stadhagaldr), and from poses depicted on the golden Horns of Gallehus for the Elder Futhark, for which there is no surviving tradition, but which doubtless shared common Germanic origins with Stadhagaldr as well.

The 18 Armanen Futharkh Runes and their Stodhr are divided into three "aetts" or "Halbdutzends" (half-dozens), of six Runes each. These groupings represent the phases of reincarnation and initiation in the Odinic-Armanen consciousness of the Edda (which has three phases - Arising, Being, and Passing-away to new Arising - corresponding to the three roots of the World Tree Yggdrasil). Hence the Halbdutzends are also known together as Yggdrasil's "Roots" of Arising, Being, and Passing Away (to new Arising).


The Second Halbdutzend (Yggdrasil's Root of Being):


The Third Halbdutzend (Yggdrasil's Root of Passing Away):


It is suggested to practice all 18 Rune postures each day in at least one complete cycle. Each Rune stadha should be held with the body, at least long enough to sing the Galdr of that Rune's name three times in a deep extended voice.

After one cycle of all 18 Rune Stadhagaldr, you can proceed to repeat the cycle, or the Stadhagaldr of any particular Rune or Runes that you sense you need additional practice with (or rather, practice in the area of life which that Rune primarily pertains to - FA for wealth, UR for health, THORN for strength, and so forth). Complete honesty to Self (Ichheit) is needed, to crush spiritual, emotional and psycho-somatic shortcomings with massive success and power through the Runes.

As Master Guido von List, Yogi Siegfried Kummer, and Master Rudolf Gorsleben taught, remember that the Runes are not merely symbols, but also powerful living magickal energies that can change the practitioner in sacred and wondrous ways. 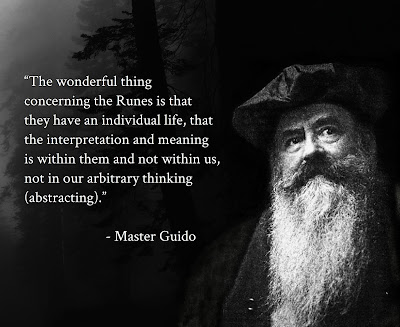 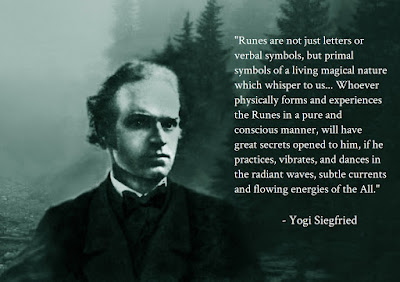 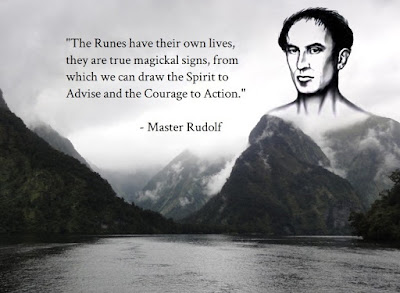