Every blog, like every book, has its target audience. And only the patently dishonest among them pretend to be all things to all people. So for as long as this blog has been around, it is only fair that it should have its own disclaimer. The following points are simply general statements of what this blog is, and what it is not; none of this is intended as a subjective value judgment; rather, it is more a statement of intent and guidelines. They may differ from the intents and guidelines of other Runic Blogs; that is to be expected, as diversity of approaches is an inevitable result of different experiences and degrees of dedication to distilling effective approaches for a particular cultural esoterica.  Some of this stuff should be obvious, but still bears repeating.

1. This is primarily a blog about Runes and, as the title suggests, magick. Specifically Nordic/Germanic magick, and primarily of the sort involving various uses of the Runes (although other areas of Nordic magick such as Seidhr are also open to coverage). So there will not be much mention of other magickal systems here, unless they are from other Indo-European traditions and merit a valid comparison. So no hermetica, no tarot, no "ceremonial high magic" and no wicca or other syncretisms. If this offends you, then there's the door.

2. This blog covers and promotes culturally valid Rune-magick. This includes modern esoteric/occult strands of Germanic Heathenry (i.e. Armanism or Armanenschaft) as they are indeed culturally grounded in a mystical Germanic and greater Indo-European Weltanschauung. While this blog is open to the occult and metaphyical side of modern runology, and not shackled to dry dusty academia, It does NOT promote blatantly fake new-age hackjobs like Ralph Blum who market false rune meanings, steal from non-Runic sources like the I-Ching and invent entirely baseless concepts like "blank runes" and yet try to pass off their books as authentic runic knowledge. If this offends you, then there's the door.

3. This blog promotes Indo-European culture. Primarily Germanic, but also Celtic, Slavic, Ossetian, Greater Iranian, Indo-Anatolian, Tocharian and others. It promotes a healthy balance of the material and spiritual, of man and nature, not a false dichotomy and forced conflict between them. It promotes a cyclical, not linear, understanding of time, and an empowering, not nihilistic, understanding of fate and will, in accordance with ancient life-affirming Indo-European principles. It does NOT promote Christianity or Jewish herder-archetype culture - there are literally millions of other blogs for that. If this offends you, then there's the door.

4. This blog promotes Indo-European metaphors and symbols, of which there are many, and most are very ancient and widespread across the planet, some being runes and many others being esoteric multi-armed solar symbols... you can guess where this is going. If ancient Indo-European symbols by themselves offend you, then there's the door.

5. This blog does not promote ethnic hate, racism, or any other sort of irrational groupthink or political agenda. It promotes religious freedom and a return of consciously Indo-European souls to Runic paths by their own free choice. If this somehow offends you... you get the idea.

1. This blog will reference the Lore of Germanic societies, but also occasionally that of other Indo-European cultures for broader comparison and clarification to fill in gaps. It is not "comparative religion" in the globalist academic sense - constant contrasting of these beliefs with those of non-Indo-European cultures is a pointless exercise in the obvious and could theoretically continue forever.

2. The approach to the Lore will be neither dogmatic nor eclectic, but openly informed. There is nothing worse than ignorance being smeared all over the Lore, whether in the guise of puritanical dogmatism, or misguided labeling of esoteric approaches to the Lore as "eclectic" or "fluff" when they are clearly not.

3. It is openly clear that the Lore itself is in many cases altered or damaged by centuries of cultural occupation from non-Indo-European creeds. Therefore it is right to be skeptical of those parts of it which appear overly fatalistic or otherwise alien to general Indo-European values, as well as to understand that it is far from a fair or even complete account of Germanic religious or magickal practices.

4. Lore from other Indo-European cultures may be consulted as necessary to fill in gaps or clarify meanings of Northern European Lore. At the same time it is not to be taken as infallible authority on the ancient practices of those cultures either, and may have faced similar problems in the history of its compilation - though obviously in different areas and contexts, which will allow for some overlap of what does survive.

1. Ignoble or coercive behavior of any type will not be tolerated. I am not here to waste time parlaying with trolls. Malignant trolls' presences are to be erased digitally here, as Thor would do physically with his hammer.

2. Purely defamatory comments/character assassination are not tolerated. If your personal criticism is malicious or just baseless, I will delete. No excuses, no equivocation, no damns given. If it were the old days I'd just liberate your loose tongue with a swing of the axe. Hávamál or Lokasenna, which are you emulating?

3. Solipsism/Special Snowflake Syndrome. I really shouldn't have to explain this. Others have already done it far better. Don't act this way. Just don't.

I would like to let everyone know that I welcome and enjoy all true feedback, both positive and negative, and I will allow all honest comments no matter how harshly you judge my conclusions. However, you must bring your proof and defend it rationally. Any sort of false accusations, baiting, trolling, virtue-signaling, dodgy drivel, spastic denial, flip-flopping, Gish gallops, insulting language, and personal slander against myself or any other contributors is completely unnecessary and will not be allowed. I won't even bother answering them anymore. The entries of those exhibiting such behavior will be deleted. Angry? Blame the hordes of earlier fools who preceded you and wasted my patience. I will also delete all responses to those entries even if the response is more sane and well thought-out, because I do not believe in letting arguments with trolls and baiters continue. This is not twitter and this is not your personal blog. It's my blog. And I have no obligation or incentive to tolerate trash on my blog. Let's keep it respectable, show respect to get respect, and maintain Frith and Ehrenschaft at all times.

Any spamming, foppery, or posting links to irrelevant websites will similarly be treated as an attempt at derailing and undermining the purpose of this blog (reviving the Runes and Indo-European consciousness) and will be dealt with as such. It is odd how such people never have the backbone to fess up and admit who pays them. Continuing such behavior will result in deletion of comments.

In addition, any comments containing URLs of websites that promote criminal/gang activity or political agitation, or for that matter anything that could get my work taken down, will be deleted. This blog does not promote any sort of political violence or gang activity, and is not connected to any political party; any attempts to do so will be dealt with swiftly. If you have such agendas place take them elsewhere. There is no place here for short-sighted criminal stupidity that will hurt serious Runers and make us all targets tarred with the same foul brush. This is cultural, not political.

Real Rune Magick is about how we can improve and elevate ourselves above the base instincts of hunter and hunted. Indeed, what contrasts the Runic paths as a proactive, solar Indo-European stream of wisdom (as opposed to reactive orbiter herd-ideologies that have lain shackles on so many of the planet's inhabitants) is that we believe in the improvability of man, through successive personal achievement, praxis and initiation, in a definable and measurable sense - in orthopraxy, not orthodoxy. We do not think anything is wholly good or wholly bad, as pure absolutes only exist as ideals, not corporealities (though striving for the ideal good is seen as meritorious and far from futile; whatever Garma you sow, your descendants will reap its Wyrd). We prefer, as such, to concentrate on (and to cultivate) what is essentially noble, ethical, self-sufficient and transformative, and to leave behind what is essentially ignoble, dishonest, abusive and regressive. I ask my readers to do the same: If you are leaving a public comment please keep the tone constructive and informative, and do not sink to the level of the sorts of lie-mongering people who seek to persecute us and silence the Old Ways once more.

Please note, I will not tolerate comments that slander, falsely accuse, harass or denigrate any individual, group, or religion, etc. While there are obviously some ideologies which are not in any way compatible with the life-affirming Runic Indo-European paths - and the contrasts are telling - there is no useful purpose in spending one's time scapegoating cabals (for the millionth time) which should have no appeal to the serious Runenmeister in the first place. The point of this blog is to unlock the wisdom of the Runes to conquer personal shortcomings - not to stagnate and blame some person or group as a lazy cop-out for said shortcomings. The powers of the Runes, let alone Asa and Arya, are not open to the cowardly whiner who merely seeks excuses instead of solutions.

Life is short. If you find yourself taking time out of your day to post negative remarks on the net, or to talk only about what others are doing wrong, I strongly recommend that you take that time to focus on improving yourself — mentally, physically, and spiritually — instead. Travel the path of Nobility and reach for the Mysteries. The quality of your life will improve, and you’ll feel more fulfilled. 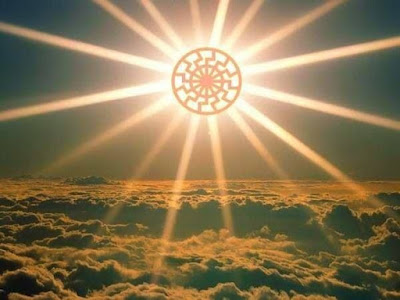